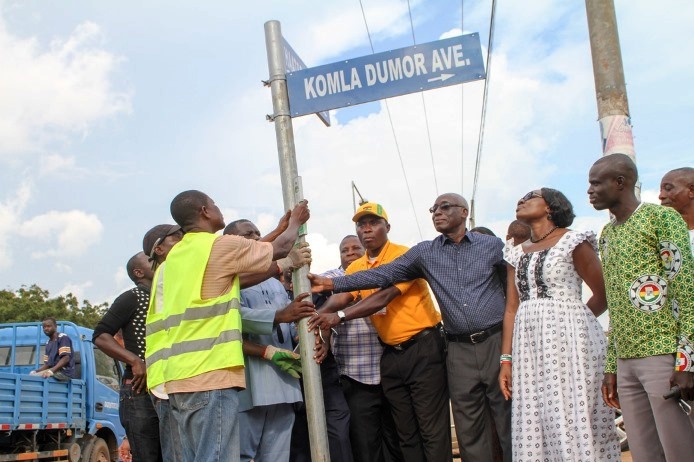 The Ga East Municipal Assembly has named a street in one of its communities after the late BBC broadcast journalist, Komla Afeke Dumor.

The act is to recognise the honour Komla Dumor brought to the municipality and to immortalise his achievements.

The occasion, which coincided with his 42nd birthday, was marked with a brief ceremony which was attended by his father, Professor Ernest Dumor, sister, Mrs Mawuena Trebarh, the Municipal Chief Executive (MCE), Mr John Kwao Sackey, some officials of the assembly, as well as some opinion leaders and residents of the Haatso Rabbit Community, where the family resides.

The street, “Komla Dumor Avenue”, is the main entrance to Haatso Rabbit and also leads to the facility which will house the soon-to-be launched Komla Dumor Foundation.

Speaking at the short but impressive ceremony, Mr Sackey said, “We were all gravely saddened by the shocking and sudden demise of our son, brother and friend and to ensure that his credentials live for eternity, the entire municipality deems it fit to honour him in such manner.

“This symbolic gesture is to demonstrate to the world our appreciation for the honour and dignity our son, brother and friend, Komla Afeke Dumor, has brought to our municipality”, Mr Sackey said.

On behalf of the family, Mrs Trebarh expressed gratitude to the Ga East Municipal Assembly and the people of the municipality and the nation at large for the recognition and honour done his brother and the entire family.

The Chairman of the Atomic Gates Home Owners’ Association, Mr Max Cobbinah, extolled the virtues of Komla Dumor and recounted his childhood days in the area and his progression to international stardom.