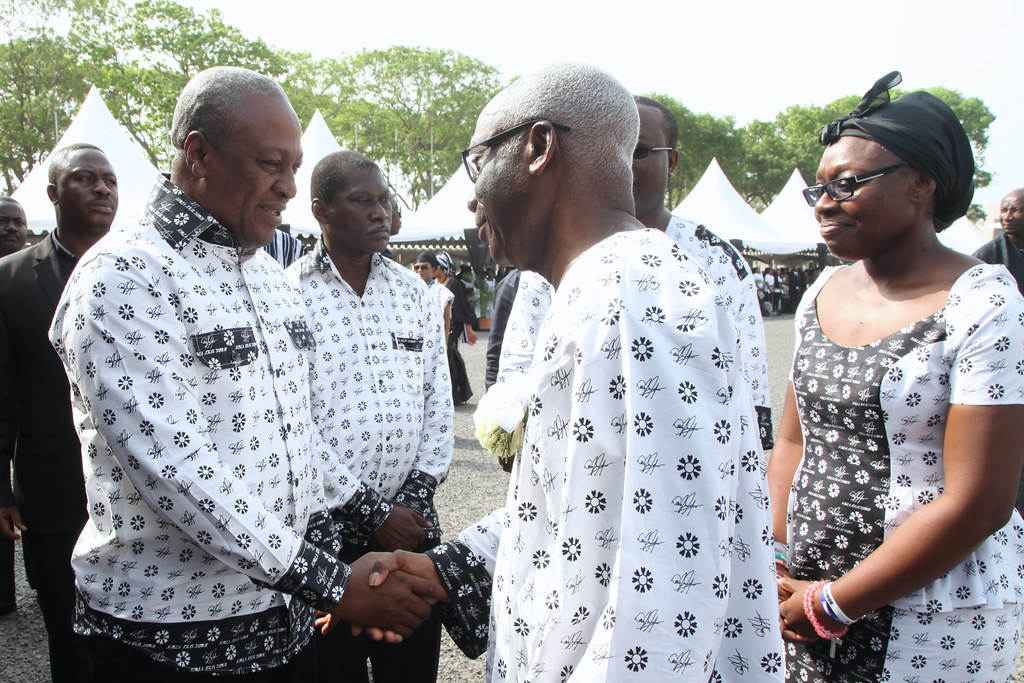 He said Komla “easily submerged his Ghanaian identity into the unifying sea of gracious and common humanity, so that millions around the world – Ghanaians and non-Ghanaians, Africans and non-Africans, black or white could claim him as one of their own.”

President Mahama made the commendation at the funeral of the late Komla Dumor, held at the forecourt of the State House in Accra.

The President in his tribute, which was read on his behalf by Mr Mahama Ayariga, Minister for Information and Media Relations, said “indeed, Komla’s stature transcends nationality, race and continents.”

He noted that no single Ghanaian had risen so far and so favourably in international broadcasting as Komla, adding, to many people, especially the youth, Komla represented a contemporary example of rewards that can follow hard work, dedication and the pursuit of excellence.

He said Komla’s success and achievements are “what our youth require in our quest to lift our dear nation and indeed Africa onto a higher level of socio-economic achievement.” “His rise, from the back of a motorbike, serving as a traffic reporter for Joy-FM Radio, to the lofty heights of being one of the lead presenters of BBC TV and radio in the United Kingdom, has been truly remarkable.” “Not only did Komla shatter the professional ceiling at the BBC through his dedicated professional attitude and thereby opened doors for many journalists, broadcasters and professionals, but he also proved that you can push yourself to excel so well in a local job that your performance is easily recognised and deemed fit and best for the world,” President Mahama said.

He said Komla’s unique style of broadcast presentation and his highly professional approach made him shine like a bright star within a galaxy, declaring that, Komla’s confident manner, incisive questioning and disarming presence helped to take his rating to admirable heights.

The President observed that Komla “leaves us with some true life lessons that, even when life gives you lemons, you can still find a humble and enduring way to turn these lemons into lemonade.”

He recounted that Komla suffered failure but did not allow failure to define him, with a level of humility and gratitude, he recalled how he failed his medical school exams in the fourth year in Nigeria, and had to abandon his plans to become a doctor.

“But he rose from the ashes of failure and disappointment, dusted himself off and bounced back on a new road that made him a star achiever in the world of international broadcast journalism.”

“He radiated hope and integrity and provided ample proof that perseverance pays! He made Ghanaians and non-Ghanaians feel a deep sense of pride watching him on the BBC,” President Mahama said.

He said Komla grew into a giant, who did not forgot his roots among the so-called “little” people, adding that, he was a connector, who managed through his work to link princes with paupers and got kings to speak to ordinary folks.

“We must thank Almighty God for the gift of Komla. We thank Komla’s family for allowing him to be shared with the whole world. Even though he left us at the young age of 41 his legacy remains worthy of emulation. Komla will not be easily forgotten. We will celebrate his life, his achievements and his legacy,” the President stated.

The funeral was attended by hundreds of Ghanaians, including Ministers of State, members of the diplomatic community, chiefs and the media fraternity in Ghana. Komla’s mortal remains would be laid to rest in his hometown, Aflao, in the Volta region, at a private ceremony. A memorial service would be held on Sunday, February 23 at the Holy Spirit Cathedral. Komla Afeke Dumor, a former Ghana Journalist of the Year, who was with the BBC World Service and Focus on Africa died of cardiac arrest on Saturday, January 18, 2014 at age 41 in London. He was a development chief in his home town of Aflao in the Ketu South District of the Volta Region of Ghana. His chieftaincy title was Torgbui Tenuvi I. He was survived by a wife and three children. He was given a private burial.