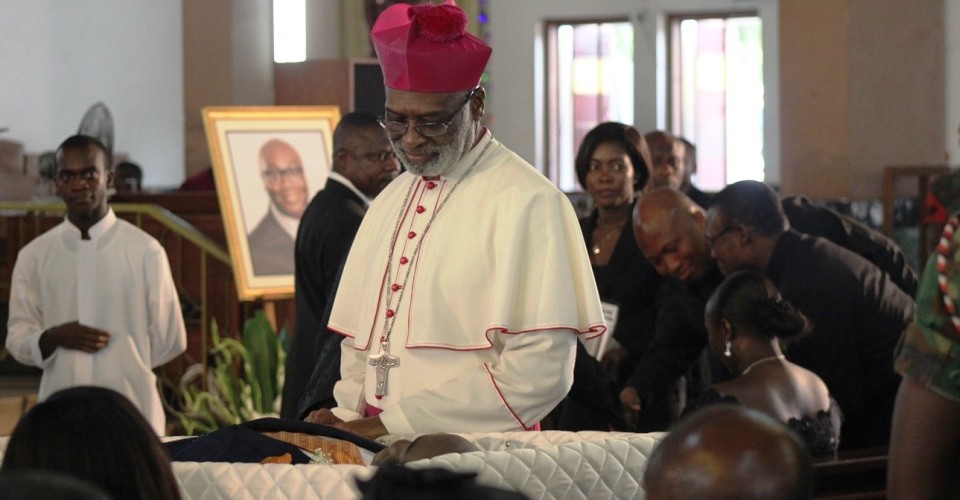 Metropolitan Archbishop of Accra, Most Rev. Gabriel Charles Palmer-Buckle has admonished the youth of Africa to emulate the late Komla Dumor and pursue excellence with zeal. Delivering his sermon Friday at the solemn mass requiem at the Holy Spirit Cathedral in Accra for the ace BBC/Joy FM broadcaster, Bishop Palmer-Buckle said the late Komla Dumor gave his best in whatever he did and consequently became an icon in many respects.

Komla Afeke Dumor born on October 3, 1972 died suddenly on January 18, 2014 at his London home, after suffering what was reported to be a cardiac arrest.He was widely acclaimed as an excellent broadcaster whose commitment to excellence and to telling the African story in a different way was unmatched.

Delivering the sermon, Bishop Palmer-Buckle urged the youth of Africa to emulate Komla to make Africa a better place. “Africa needs you my dear people, Africa needs many young ones to fill in the shoes of Komla…model your lives on Komla…”

According to him, “the best role anyone can play to the memory of Komla” who lived his life excellently “is by serving God and humanity”. He said although Komla’s sudden demise at a prime age of 41 is painful, he lived a fulfilled life. He urged the congregation to continue to pray for a peaceful rest for Komla.

“However, please in your grief and your cries…tell Jesus to ask God on your behalf what he knows is best for Komla…”

The mortal remains of Komla Dumor will be interred on Saturday in a private family ceremony. A liturgical service will be held on the 22nd of February 2014 at the forecourt of the State House. Finally, there will be a Thanksgiving Service on the 23rd of February 2014 also at the Holy Spirit Cathedral.