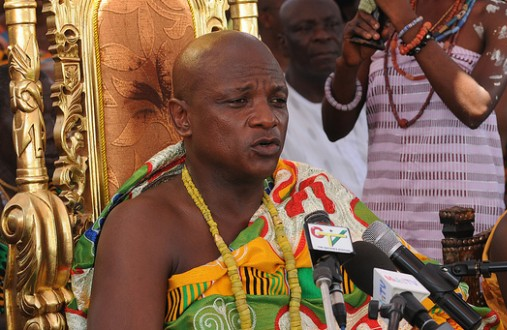 Prof. Ernest Dumor, father of Komla Dumor, accompanied by family members, on Sunday 26th January 2014 called on the President of the Volta Region House of Chiefs, Togbe Afede XIV to inform him formally about the passing of his son which occurred in London on Saturday 18th January 2014.

Receiving Professor Dumor, Togbe Afede XIV described the news as heartbreaking and said that he and the whole of the Volta Region House of Chiefs would stand firmly behind the family in all that the family would be doing in respect of the funeral.

Professor Dumor indicated that the family had taken a decision to bring Komla back home to Ghana for his burial. He added that documentation associated with transporting the body back to Ghana was far advanced.

The family used the opportunity to once again thank Ghanaians for their support, love and prayers. Prof. Dumor said, “We are mindful of the worldwide legacy that Komla has left behind and thank the Almighty God for the impact of Komla’s life.”

Professor Dumor added that he has been particularly struck by how deeply young people have been expressing their sympathies. The family would ensure that in the arrangements for the funeral, the involvement of such young people is not overlooked. The family is undertaking the consultations needed so that the numerous people who feel a deep sense of loss at Komla’s passing are able to participate meaningfully in his final journey.

Present at the meeting with the President of the Volta Region House of Chiefs was Togbi Amenya Fiti V, Paramonunt Chief of Aflao.