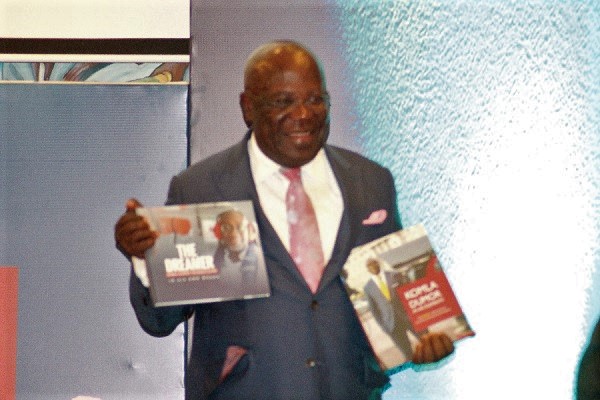 In celebration of Komla Dumor’s illustrious years as a broadcaster and endearing personality, the Komla Dumor Memorial Foundation has launched two books in his honour.
The books: ‘Komla Dumor In His Elements’ and ‘The Dreamer, Komla Dumor the Boss Player in His own words’, were authored by Komla’s father, Professor Ernest Dumor, and Komla’s brother, Dr Korshie Dumor.

They are compilations of the personal writings of Komla Dumor and his meteoric rise to the enviable position of an icon in international and African broadcast journalism.

The Chancellor of the University of Ghana, Dr Mary Chinery-Hesse, who wrote the foreword of ‘Komla Dumor In His Elements’, described the themes highlighted in the book as a reflection of the rich life experiences and the ideals Komla stood for.

“It also captures the challenges he must have faced in pursuit of his passions.

The reader will get a glimpse of the coping mechanisms he relied on for survival on occasion, in the sometimes hostile working environments where his soaring destiny would have taken him,” she added.

A close friend of Komla’s, Mr Charles Zwennes, in his review of ‘The Dreamer, Komla Dumor the Boss Player in His own words’, described the book as “a compilation of a large part of Komla’s work as a journalist at the BBC and a compendium just about every trip he made across the continent, Presidents whom he met, his thoughts and feelings about those experiences that he went through during the course of his life as a journalist”.

“There are a lot of his thoughts as a Pan-Africanist in the book which are inspirational to the older generation, the middle generation and the younger generation.

He also demonstrated from his thoughts just how much of an effective communicator he was and, therefore, anyone who is interested in going into that area of journalism and media will find a lot of his thoughts in here very helpful,” he added.

The book launch and fund-raising dinner, which were jointly held in Accra, brought together family, friends and individuals, spanning diverse professions, to celebrate the legacy of excellence Komla etched for himself.

In attendance were the legal practitioner, Mr Tsatsu Tsikata; a former Commissioner of the Commission on Human Rights and Administrative Justice, Mr Justice Francis Emile Short; the Chief Executive Officer (CEO) of the Ghana Chamber of Telecommunications, Mr Kenneth Ashigbey; a former Minister of Finance, Mr Seth Terkper, and a host of other dignitaries.

From James Varrick Armaah’s “Oye” to Ken Kafui’s “Mida Akpe Na Mawu”, the group turned the atmosphere, which was initially “solemn”, into one of praise and celebration.

Launching the books, the Ghanaian businessman, Sir Dr Sam Jonah, who is also a member of the Board of Trustees of the Komla Dumor Memorial Foundation, described Komla as “a man who had an audacity of faith, out of which came his unassailable courage to stand on an international digital platform, as an African, to give a new twist to telling the African Story”.

Proceeds from the sale of the books will be used to fund two legacy projects of the Komla Dumor Memorial Foundation — the Komla Dumor Institute for Broadcast Journalism, which will train a new class of African broadcast journalists, and a cardiac health project, which will offer support to professionals who may be at risk of cardiovascular diseases.