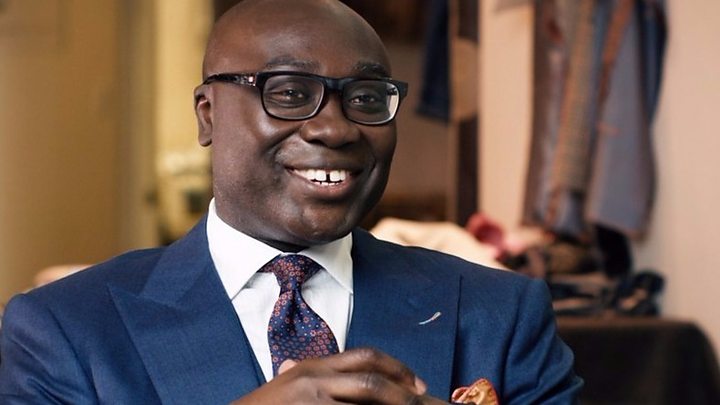 I had a tough time at work on Saturday, January 18, 2014, so when I got home, all I wanted to do was to take a nap. Before I could even take the first stretch with its associated deep breath while in bed; I received a “WhatsApp” message from a friend who recently relocated from Dallas to Los Angeles, CA. It was around 7:30pm CST, so it was very weird to me because he hardly sent messages around that time of the day.

The message was a snap shot photograph from www.ghanacelebrities.com about one of my most admired friends, and a colleague who had indirectly influenced me on my unflinching aversion against corruption in Ghana. I’m talking about Komla Afeke Dumor. The message was titled “Ghanaian/BBC Broadcaster Journalist Komla Dumor is DEAD!” In that picture, he was just smiling in his black and white suit with a blue tie, so it seemed to me that it was one of those unnecessary scams on Face book and Twitter where people joke about the death of others which eventually turns out to be a hoax.

To my ultimate shock, immediately, I replied him and said, “Why would people be so insensitive to joke with stuff like this!” Mr. Ledo (my friend) replied and said “No! This one is for real! He’s gone too soon! Check www.ghanaweb.com or www.myjoyonline.com for details. Within a minute, I checked it out and even called another friend in Ghana to confirm around 2:00am GMT in Accra.

Since then, I have been in a state of denial and still struggling to come to terms with the reality. Sometimes, life is not fair especially, when it has to do with the death of an influential image. Unfortunately, that’s just the way it is, and “Komla” has paid the ultimate price for being an exceptional journalist, presenter and a broadcaster.

Komla Afeke Dumor was my year mate and we both graduated in 1998 from University of Ghana, Legon. He was in Legon Hall and I was in Commonwealth Hall- a VANDAL but we were both in the Faculty of Social Studies. He majored in Sociology with Psychology while, I majored in Geography and Resource Development.

I knew him very well while in Legon due to his fame as a Joy FM’s Super Morning Show host, which was at its inception a plausible stage at the time. I followed that program on a daily basis while in Ghana, and that was the time when I learned more about this unique, unparalleled journalist.

Unfortunately, I did not have the opportunity to meet him because he was always busy with his new radio show at Joy FM most of the time. But there was one unique thing that I knew we shared in common at the time. He was very brilliant, articulate, humble and most importantly, despised corrupt practices.

This is something that is so dear to my heart, even to date and I knew at the time that we shared this common interest. Anybody who listened to this illustrious son’s program at the time, knew that Komla Dumor hated corruption in Ghana.

I thought that I would meet Komla again, this time on a personal level, until a decade later when we met in Houston TX, in November of 2008 at the Omni Hotel. There was a job fair which was organized by the “African Future Leaders” (AFL) to recruit young and talented Africans who wanted to return to the continent and help after graduation.

Among the companies at the time was Tullow Oil Company, which was preparing to start drilling on the coast of Ghana. So this attracted some of us to take advantage of that hiring event and see what was in stock.

When I got to the program at about 11:00 am CST, I saw this man who I respected a lot in a group of about five other guys who all happened to be former students of University of Ghana. I approached him and asked if my face looked familiar to him. He replied; “Why not? I just don’t know your name but I think you are a VANDAL!” This spawned a minute of laughter or so as we continued to interact with each other. Just like all others, my first impression was that he was there to cover the program.

But when we asked him about why he’s there all the way from Ghana, he was quick to respond that it was just a coincidence. He had come to visit a friend in Sugar Land, TX, about 30 minutes’ drive from Houston. So when his friend told him about the hiring event in Huston, they decided to check it out.

Interestingly, it was during this job fair that he disclosed his job appointment at BBC to us. He was so excited about his new job and almost half of our conversation centered on his new job at BBC. I seized that opportunity to tell him how I’ve also emulated him over the years and nursed an ambition to fight corruption when I return to Ghana.

He paused for a minute and asked me “Are you serious right now? Aren’t you in America for money?” “Not really! Even if I do, I don’t want to amass wealth through corrupt practices”, I replied! Komla was shocked to hear my response and told me that he had never met any young man who had that kind of conversation with him.

He assured me that if I returned to Ghana anytime soon, he was pretty sure we could work together on this difficult but winnable battle. Immediately, I knew in my heart that he was a young and dedicated journalist who loathed corruption. That was the beginning of my respect and admiration for him.

Komla was a true son of Africa who achieved more than most of his contemporaries within 41 years of his short life. Though he was rich himself in all aspects, he never saw wealth as the ultimate path to fame and popularity. He was always ready and very adaptable to lending a hand, if he could.

It just doesn’t make sense to us as human beings why someone who is on top of his career, soaring high on the continent and constantly stepping on toes and choking the neck of corrupt African leaders while promoting the good side and image of Africa; and so inspiring to the young generation with his flair in front of the camera, a mentor and counselor to his own colleagues, and a light to the future of journalism in Africa be gone too soon? But guess what, he’s fought a good fight, and ran the race to touch the line while at the same time holding the hands of the weak who were out of breath to also cross the line. He was a dedicated journalist who despised greed, and was full of innovative ideas with new thinking! It’s my fervent wish that he’ll be accorded a befitting state burial if possible, because Komla deserves it.

Death is indeed, the killer of young and old, strong and weak, rich and poor, brilliant and dumb, corrupt and honest, emperor and servant and above all, legends. As for Kings, Queens, Prince, Princesses and the towering figures in society, now I know for real that he kicks them! Komla, “Agya animoyamfo, Onyame emfa wo nsie dwoo dwoo!” Go well, please. Amen!

Epilogue – 03/10/2019 I wrote this article 5 years ago at the time of Komla’s passing and it seems, his voice speaking loudly against corruption on our continent is desperately needed more than ever even 5 years since his departure. As I join his family, friends, well-wishers and admirers all over the world to celebrate what would have been his 47th birthday, may we be inspired by Komla’s legacy to fight for what is right.